Here is a list of learning points along the path of my build. It doesn’t represent a list of problems with the kit (most of the issues are mine) but simply points to note, outstanding issues to resolve, and things I must remember to do at a later date.

1. Differential spacers are a little too big and need reducing. Done

2. Differential rear stabiliser bolt & spacer is not supplied; needs a 40mm M8 and a spacer. Sourced and installed.

3. Check the fitting of the steering column – Not a problem. It comes down to driving position. If you want the steering wheel closer to you then add the supplied spacers. If not then tap the lower shaft back into the body of the upper shaft. 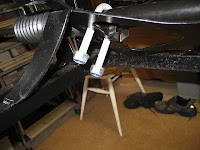 4. Check the fitting of the steering rack U clap – Simply chop circa 20mm to 25mm off each leg for a better fit. Black hammerite also helps blend it in with the powder coated chassis.

6. Which braided hoses go on the front and which on the rear (small or large). – Thanks to RichardL for a response on this: Long ones on the back and with the very helpful note that the braided line has to wind into the calliper first, then attach to the chassis.

7. The rivnut and bolt supplied for the rear brake splitter are not suitable for the pre-drilled hole in the chassis. Requires an M6 bolts and washers. Done.

8. The supplied jubilee clamps. On the small diameter fuel hose these clamps tend to distort and then the screw tends to miss the thread and fail to tighten any further. I think I will source some more and replace them. I really don’t want  fuel leaks and especially ones that will potentially only become visible once the car is almost complete. Replacing them then will be much more difficult. – Done – tight now.

9. Had to rebend all three brake pipes from the master cylinder all the way back because the pedal box would not fit around my initial arrangement. An information sheet or a not on the existing Pedal Box information sheet from GBS would help others avoid this frustration. 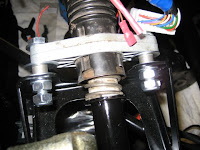 10. Don’t forget to remove the standard nuts and replace with nylocs on the steering column. Done

11. The short breather pipe which should be attached to the top of the diff seems to have been displaced in transit. According to the Rhocar forum GBS make a replacement. I will get in touch with Richard@GBS to source one. Rhocar thread. GBS supplied a machined aluminium replacement – now fitted.

12. Tried to fit the upper ball joint but found sever resistance after only a couple of turns. I suspect it is powder coating in the threads. But I haven’t got a tap of this size so will have to source one. M18 1.5 tapp arrived from Hong Kong. Cleaned the threads perfectly. 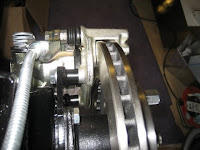 13. The supplied calliper bolts for the rear look too long. If tightened I think they would actually touch the brake disk. I will need to shorten them by 8mm or so. Done, although very difficult to locate in the calliper after shortening.

14. When the rear brake calliper is tightened up the calliper touches the brake disk. Either I have assembled this wrong or I need to grind 1mm-2mm off the hub carrier brackets. Check with GBS. No problem with the assembly. I need to remove the powder coat from the end of the bracket (plus a little of the bracket as well). Done. 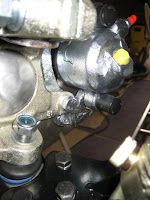 16. Another query. The supplied bolts to attach the front brake calliper to the hub, protrude through the hub and touch the brake disk. A couple of washers fix this – see photo. Is this OK? GBS say yep no problem as long as the bolts and torqued up and thread locked

17. Reminder to self – remember to tighten all of the brake line connections – they are only finger tight at the moment. Done

18. The threads inside the steering rack extension tubes are corroded which is preventing the extensions screwing onto the rack any further than 10mm to 15mm. An M14 x2 tap has been ordered to clean the threads. Threads cleaned. All fine and dandy 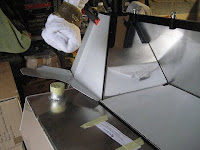 19. The corner boot infill panels seem to have been bend at the wrong angle. Re-bent flush with the top of the petrol tank

20. Positioning the rear brake pipes horizontal to the rear T-piece leaves no clearance for the hand-brake tension adjuster once tension is applied. Moved the T-Piece mounting point up slightly.

21. After initial fitting of the engine and gearbox, I noticed that the clutch actuator arm had no resistance at all for 2/3rds of its potential traval and then wouldn’t budge beyond that point. I was expecting full travel and a clutch like “feel” to the actuator arm. Phoned GBS. The initial play is removed by adjustment and the spring fingers on the clutch pressure plate are too strong to be moved by hand action of the actuator arm. You need to install the clutch cable and pedal to get the real “feel” of the clutch. 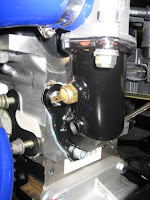 22. The Smiths Oil sender. There is a GBS fact sheet about this, but I found it less than helpful. It talks about an “adaptor” and there is a little brass visible in the picture between the sender and the block. As I don’t have an “adaptor”and the thread on the sender seems to match that for the block I have screwed the sender straight into the block. Ben@GBS informs me that this is correct. It screws directly into the engine block.

23. Water temp sensor. Not sure about this. There are two tapped holes in the GBS elbow under the thermostat housing. I have screwed the temp sensor into the top one, but what goes into the second? Another question for Richard@GBS. This second hole is for the Emerald ECU temp sensor – See Sensors

24. The radiator cooling fan has me perplexed. I can’t figure out how it is installed, especially since it appears different to others installed on similar Zeros. Ben@GBS informs me that the fan simply clips to the front of the radiator see Radiator – Take 2 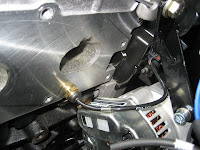 25. I have no idea what this sensor is. It was already attached to the block, but I don’t seem to have a connection for it as part of the GBS loom. Can anyone help? This is the original Ford water temperature sensor. It is incompatible with the Emerald ECU and can be removed. It is replaced by the GBS supplied sensor that fits into the elbow – see 23 above.

26. The standard Ford fuel regulator has a nylon pipe running from it’s lower extremities. I am not sure where it should be connected. This is not needed. See Rhocar thread. 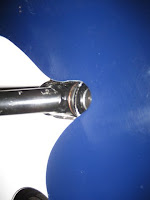 27. I must also check the IACV feed from the plenam. I am sure that it has been drilled out as I can remember checking before I installed the plenam, but I need to double check, especially if the engine doesn’t idle properly. The IACV seems to work so must be ok

28. Nose-cone: The top of the cone lines up parallel with the chassis and in reasonable position for drilling a fixing hole, but the lower panel is not over the chassis cross bar and the sides snag on the wishbones. GBS Supplied “old stock” nose cone. It requires reshaping around the upper wishbones to fit properly (see Nose-cone – Part 2).

29. Just noticed from the loom that I am missing a brake fluid sensor. Need to pick one up from GBS. Done and fitted 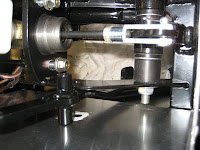 31. Could also do with a pack of aluminium alignment pins for the bonnet. GBS sell them in packs of 5. Or maybe I will file down the heads of some bolts – just as effective and a lot cheaper.31. I don’t have a battery tray, brass battery terminals or the battery strap. Need to pick them up from GBS. Done but they only had a stainless one. So I will mount with some neoprene between the aluminium and the steel to stop any adverse reactions.

32. Need to check what can and can’t be fitted prior to IVA. I am going to ask GBS to do the geometry set up and pre-checks before IVA, but need to understand if for example the wiper motor can be installed now or must it wait, and what about the windscreen. I have opted to install everything I can. Get the car a finished as I can make it. GBS will replace and adjust as necessary to get it through it’s test

33. Also need to double ceck the wiring routes and engine start up sequence with GBS before I complete the wiring and put the car back together for (I hope) the last time before IVA. I don’t want everything tidied away and tiewrapped down only to find I need to open it all up again because I failed to connect something obscure that is needed to keep the engine running happily. GBS Map for Emerald has been emailed to me – see posts on start-up.

34. Engine mapping – I have downloaded the Emerald manual, but I am not an automotive engineer. I need some basic advice to orient and put into context what it is trying to explain. Without this I am a little lost. Given time and a lot of supplementary reading I am sure I will get there – just think it would be a lot quicker to get a simple tutorial from Simon@GBS next time I visit.