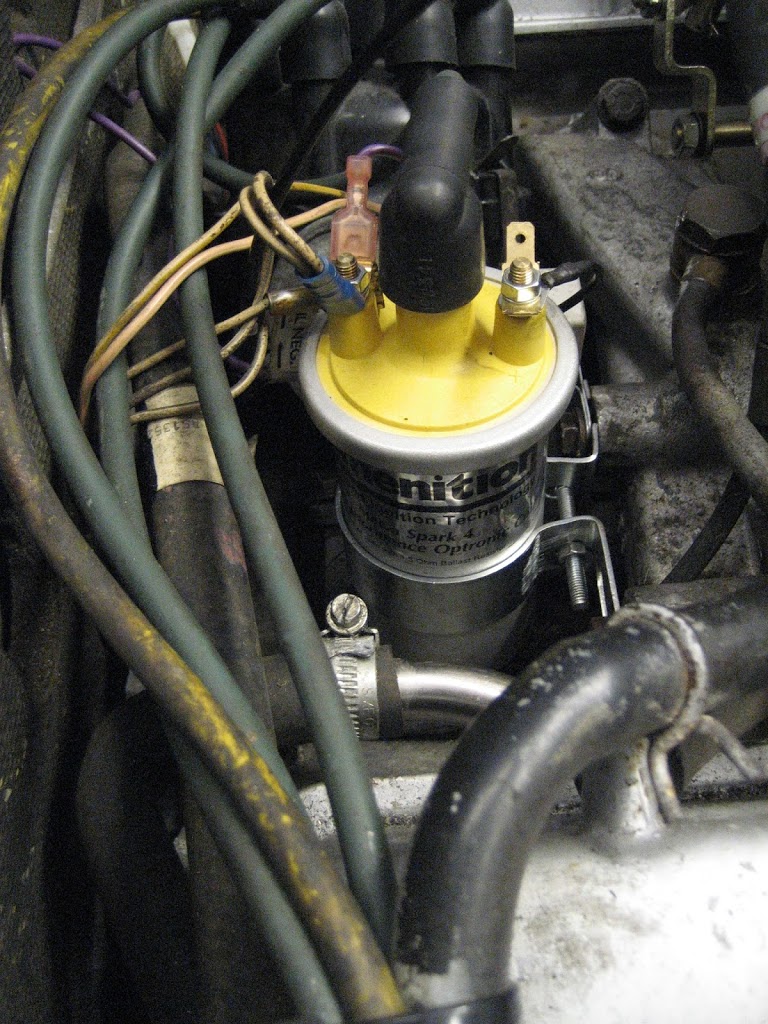 As I really have no clue as to when this car was last treated to a service, then I thought that I should do it now. At least I will have a baseline to work with.
I’ll start with the basics: Had to remove the rubber strip from around the outside of the air filter before it would fit in the air box. Also the air box needed a good rub-down to remove surface rust. I need some aluminium colour paint to finish it off now. The temp compensation value also seemed defunct. The coil and plugs were both OK. Although the plugs looked like they had been in there for some time, when removed they were fine. A little blackened from runing on choke recently but no signs of wear and tear. Good for spares.
The distributor cap looked fine, although like all of these parts it looked like it had been in-situ for 10 years plus. I replaced it anyway and likewise the rotor arm. The fuel filter in the front was also replaced. The one in the boot will be done when I get that far. Finally a new set of leads and lead guides ti neaten the engine bay a little. 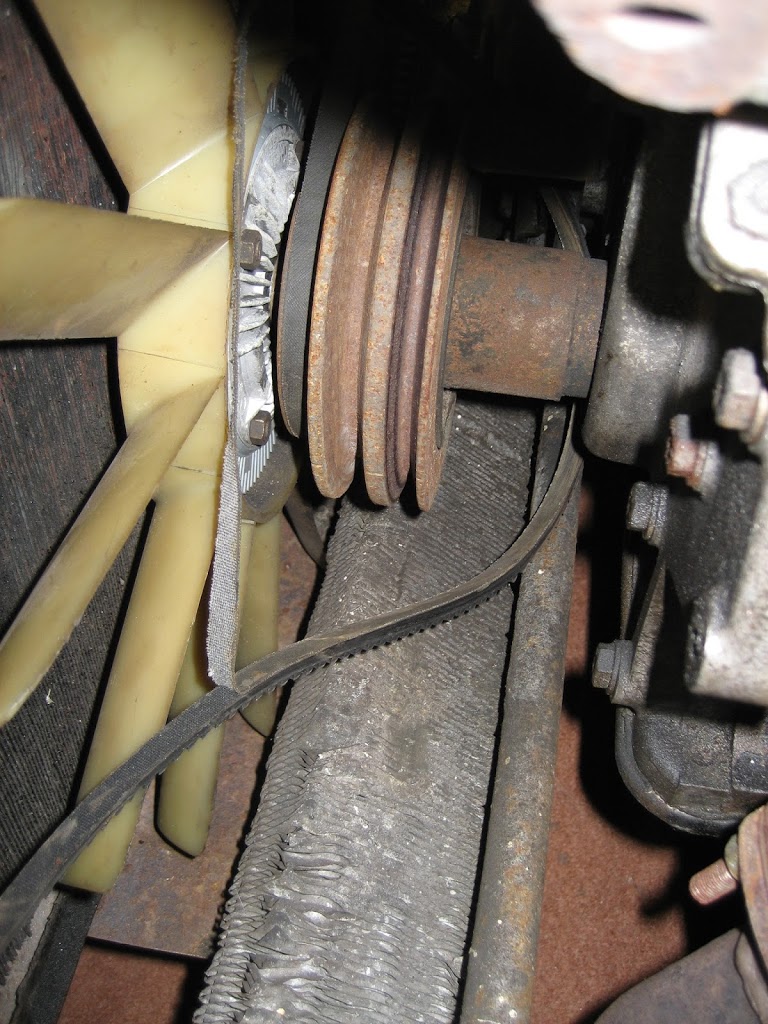 On inspection I noticed that the belt between the fan and the alternator was shredded and hanging loose. That would explain the other feature of the drive home. The sudden drop in charging of the battery. I was lucky the car had been recently fitted with a new battery as there was no chance it was creating and electricity with the perished belt in such a state. Ordered new belts (alternator and power steering) from Rimmer Brothers. Should be here is a few days along with a small fortune of other bits to cover the other areas that need attention.

Rimmer Brothers delivered as they promised a couple of weeks ago. A minor plumbing emergency in the downstairs cloakroom has prevented me doing anything on the Stag for the last couple of weekends whilst the radiator was fixed, floor dried and relayed and basin replaced – just the tiling to do but that can wait. Slackened off the bolts holding the alternator and power steering pump. Difficult to get at as there isn’t a lot of clearance between them and the radiator / fan. Replacing the belts is simply a matter of threading them back around the pulleys, but tensioning the alternator belt took a little more time. Trying to lever the alternator whilst also tightening the mounting bots is ideally done with more than one pair of hands, but with perseverance (and a little swearing) it all came together. 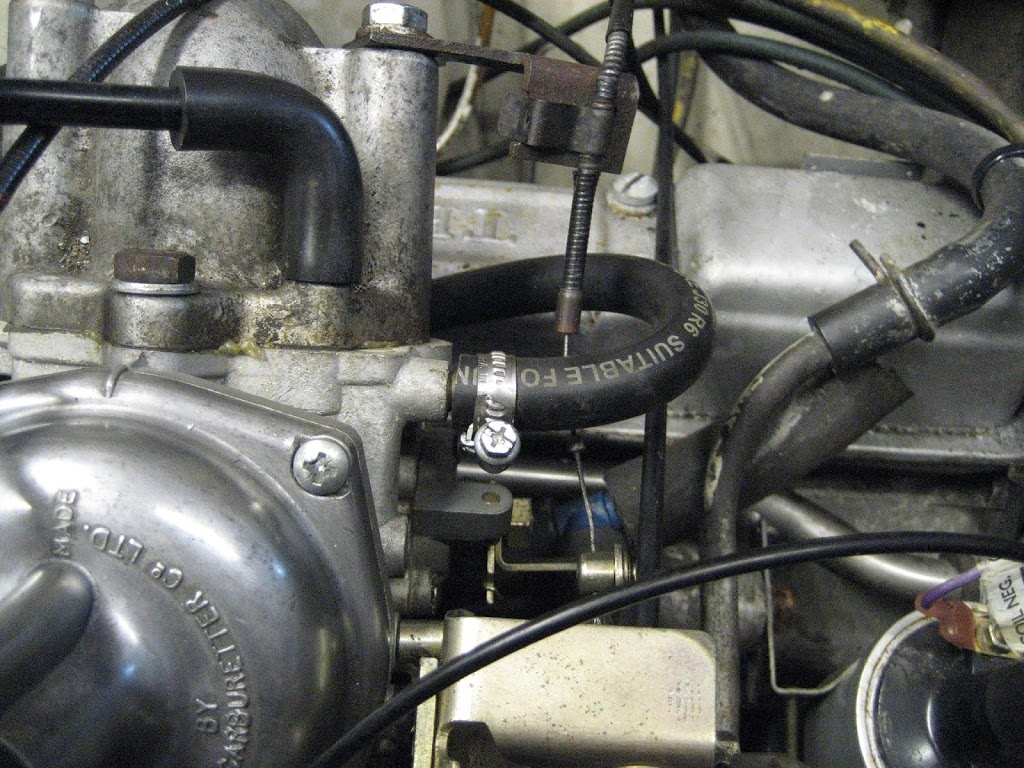 On inspection I noticed that the fuel pipe to the drivers side carb has sprung off the carb and was hanging free. The car must have been running on a single carb for the last few miles home. That would explain the loss of power when driving back.

Replaced the pipe and re-connected – tighter this time. 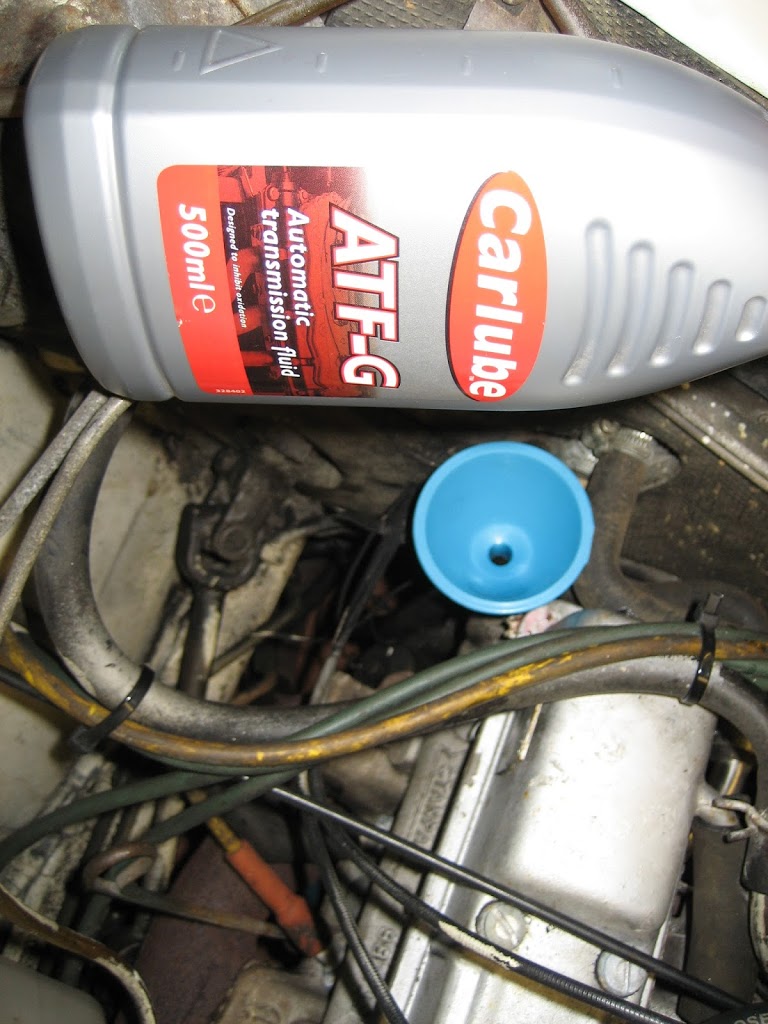 The car was manufactured with a Borg Warner 35 auto gearbox. I think the same unit is still in the car. With the car running, reverse selects OK, but drive (especially first) may not engage initially in D or 1. Applying some revs has either no effect or drive is suddenly acquired with a jolt that can spin the rear wheels – not pleasant. After some superficial forum research it sounded like a simple lack of fluid. On checking the dip stick – nothing – not a trace on the stick. Off to the local motor factors, but no one locally stocks ATF without Dexron. So back to the interweb and wait for delivery.

There seems to be two ways of checking the fluid level before topping up:
a) Start the engine and run the selector through all drive settings, then quickly dip and fill to the lower/cold mark
b) Start the engine and drive the vehicle until warm making sure that all drive settings have been used. Park up on a level surface and quickly dip and fill.

As mine was being a little temperamental I went with (a) to start with. It drank about 300ml before it was seen on the  bottom of the dip stick. I will do (b) the next time I go for a run.

Following my initial inspection (1st May 2017)