I’ve been thinking about the fit of the back panel on and off all week – something wasn’t right. Took another look this morning and again, there was definitely something amiss. In order to get the side panels (over the shocks) to line up, even roughly under force was very difficult. 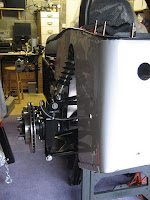 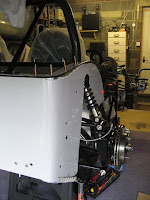 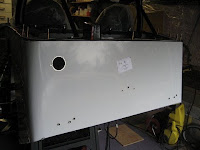 So spent an hour with a fresh ground coffee and a laptop scouring blogs. A number of the recent and well illustrated blogs are for the GT chassis which has a different arrangement of panels at the back. But then I found it….. and it was (as usual with these things) as obvious as the worry lines on my forehead. The two stays linking the roll-bar to the back-panel were neither level nor the correct hight above the rear chassis. As I don’t know what the correct height is, I adjusted them (brute force) bending them upwards slightly each time, keeping them level until the back panel fitted properly. Much better now. So much so I have started to drill the rivet holes for the final fixing. 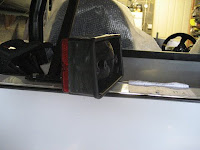 I did get distracted at one point when I noted the proximity of the fuel tank to the mounting points for the rear warning lights. Would there be sufficient room for a rivnut? So before I permanently riveted and bonded anything I widened the mounting holes to 9mm and popped some rivnuts in. Then I needed to cut down the rear cases on the lamps for IVA before I could check that they all fitted together without snagging on the tank. I took 8mm of the back of the lamps with a fine toothed hack saw and used some IVA trim to tidy up. They now fit at 90 degrees to the road.
My work and home life have limited progress this week. Maybe I will book a week off soon and make some progress.

I have not been looking forward to this element of the build, but it has to be done. 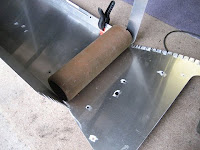 Looking at the outer radius of U-shaped rear shroud, I found a piece of 6″ sewer pipe (un-used) with roughly the same radius. Surely it was a simple matter of bending the panel around the pipe? 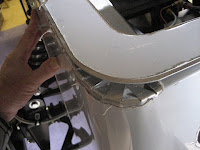 Having done this and presented the rear panel up to the chassis, I found that it wasn’t such a simple process after all. The radius of the bend at the top of the panel was simply not tight enough and if I tried to tighten it the panel didn’t fit around the rear uprights. I tried a number of bends but the panels needs to fit close to rear chassis member which limits movement. 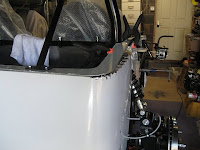 In the end I removed the first tab from each side of the upper part of panel where it meets the chassis over the coil springs. This has allowed the radius to shrink under the shroud but I think I may be be saving up another problem as the panel doesn’t seem horizontal where it will eventually meet the side panels. I hope it will pull up as I rivet it all together. Finally today I applied the IVA trim to the rear shroud. The instructions on the GBS web site are contradictory here. They say that the broad tadpole trim is used on both side of the shroud, but also the small edge trim should be used on the internal edge. Having checked by reference photos of factory built cars it looks like the broad tadpole trim is used for the outer edge and the small edge trim for the internal. 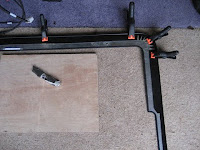 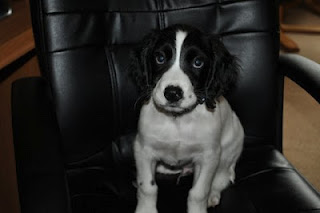 The last few weekends have been busy ones. I have a rather large hedge around both front and rear gardens that needs cutting at least twice a year. I couldn’t put this off any longer. And there is Finlay the springer spaniel who wants to play for as long as you will throw a ball for him. And finally there is my job that is infringing into my weekends of late (but hopefully only short term). 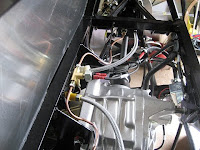 However, that said I did manage a few hours in the garage this weekend.
With the car still up on high trestles I thought I would do some more on the boot space and get the fuel tank finished. I started by tidying the cables and pipes making sure nothing was going to dangle or potentially get caught in the rotating drive shafts. I specifically anchored the return fuel pipe to the chassis with a couple of cable ties just in case the IVA inspectors torch shone in that direction. 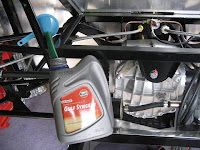 Next I filled the diff with oil. A trivial job with the car in the air and no back panel on, but I suspect much trickier later on. 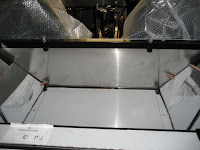 Then it was the turn of the in-fill panels. I marked up and drilled the triangular panels each side and held them with clecos for now. I have found that the “black glue” solidifies in the tube after a few weeks if not used, so I will wait until a few panels that need bonding before I open another one.
The maintenance hatch has been cut to fit the hole between the chassis members, but once the triangular in-fill panels are in place the panel will be unable to be removed upwards. There’s no point in a maintenance hatch that can’t be opened, so I have trimmed the hatch panel such that it can be removed vertically from inside the boot space and held it down with 4 rivnuts rather than rivets. 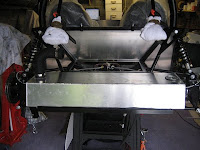 Having now done as much as I can here, I finally bonded in the fuel tank centrally to the chassis, using the “black glue” from a tube I cut in half, so as not to waste it, since the nossle and front of the tube were blocked.

As I have found so far, some jobs can be done to a point and then have to stop to wait for something, like a tap or a washer or just inspiration. So I think I will just continue down both avenues in parallel. That way if one stalls I can make progress on the other.
In order to start on the engine it needs to be moved and that involves moving the car first and dropping it down to axle stands. I need to source the axle stands first.
So, on with the rear. The fuel tank sender is the next job. Having marked up the position for the pilot holes for the self tappers, I drilled 3.2mm holes and tried valiantly to catch the swarf before it disappeared into the fuel tank. I then swilled out the tank with some fresh fuel before coating the gasket with some Locktite 5922 and putting it all together. Left it to harden off. 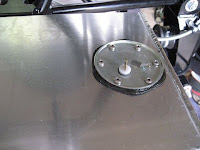 While the car is still at a comfortable working height, I thought I would position the seat runners ( and it was a good excuse to see the seats in the car for the first time). 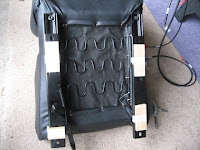 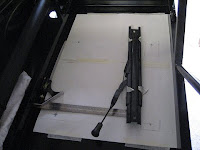 It is difficult to mark positions on the black powder coat, so the first step was to cover the floor with paper and then mark the position on the runners on the paper. As each runner has a nyloc between it and the floor, I used some waste wood as a spacer, which also prevented any scratches. 8mm holes drilled, I decided to mount the seat runners upside down on the base of the seats. Structurally I couldn’t see any reason why not, and the fixing bolts are much easier to get at this way around. As the seats are coming out again to fit the internal panels etc I used standard nuts rather than the nylocs. 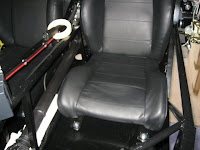 There doesn’t seem to be much tolerance between the seat edges and the side panels / central tunnel – snug. I may have to alter the seat runners slightly once all the panels are on. 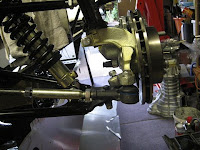 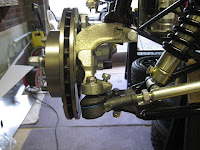 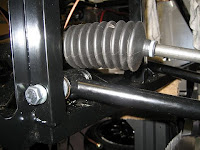 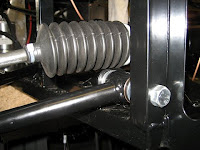 Having finished the steering rack assembly I adjust the distance from the back of the lock nut and the centre of the top ball joint to approx. 48mm and the steering rack extensions so that the wheels point straight. The clearance below the steering rack gaiters either side is very tight. Only a couple of millimetres. But it is clear – just.
As the side panels are not on yet, all this will have to come off again, so I have not tightened any of the nylocs and non of the IVA plastics have been installed. I now have all 4 corners built and the steering working. Pretty much a rolling chassis.

No progress on the build this weekend. A new addition to the family has occupied all available time today. 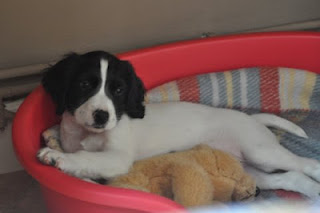 I did manage a great day at Donnington Park yesterday though. There were many Zeros on show both on the GBS stand and also in the RHOCar enclosure. Managed to speak to a number of Zero builders, all keen to explain the hows and whys. I really do like this aspect of kit car building.
You may have seen from earlier posts that I have been trying to decide how I should finish the exterior of my car. I decided this weekend thanks to the Donnington show. I spoke with 2 owners who had polished their aluminium panels, and was able to see the end result and talk to them about how it was achieved. I learned that Auto Glym Metal Polish is the stuff to use. Having tried it today I agree. It doesn’t produce the mirror effect I came close to with specialist metal polishes and power tools, but occupies an understated middle ground between high polish and the brushed matt. The problem I had with the high sheen was three fold: firstly it was very effort intensive; secondly it would be difficult to get a consistent finish across such a large area; and finally it would never be a stainless steel finish, so it would always look like a scratched version of stainless to the novice eye. Decision made.
I also picked up a battery isolation switch from the show. I am not looking to install it so that I can go racing, but as a security feature under the dash somewhere.