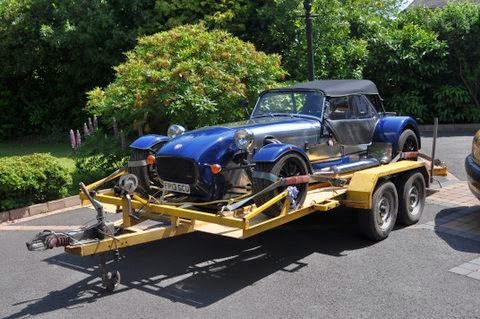 The day had finally come. After 6 months of thinking about it, it wss now time to put the thoughts into action. A good friend of mine kindly loaned me his car trailer (thank you once more Garry) and I loaded her aboard and strapped her down. With the doors and half-hood in place, the majority of the car is watertight (or so I thought, but I will come to that) with only the rear quarter lights each side open to the elements and a gap between the hood and the boot cover. The trailer plus the car equate to approximately 2/3rds the weight of my wife’s Rav4 that I was using to pull it. With a double axle trailer (with braking), this is well within legal limits but the Rav4 (2.0L petrol) was not really up to the job. The brakes and clutch took a pounding and I had to use all of the gears to get up some of the hills.

Stafford to Nurburgring is circa 550 miles and pulling a trailer that meant 12 hours of driving – a long way!! So we broke the journey on the outward leg with a stay at a hotel in Maidstone on Sunday night and an early crossing (8am) on Le Shuttle. We arrived at the Ring at 3:30pm to some sunshine and a warm welcome from our German host Bernd Backes. We then set up a “GBS area” across the road from the “Devil’s Diner” and the entrance to the Nordschliefe.

Bernd has an old Fire-Truck that he uses to transport the catering equipment, supplies and an essential mobile workshop for the cars.

Once we picked a suitable place, we offloaded the cars and supplies. Don’t they look good!!
With the essentials in place it was time to recce the track. There was a “tourist” session going on which means that the Nordschliefe is treated as a German toll road. Anyone with a licence and a road legal car can pay the toll (27 Euros) and do a circuit. It was mayhem. There was everything from top end Mercs and BMWs to old battered Golf GTIs and everything in between, plus hundreds of bikers. It wasn’t long before the red flags appeared and the track closed whilst they cleared up the remains of another smash. I thought to myself – what have I let myself in for? With that thought left in my mind and after a long day of pulling the trailer across England, France, Belgium, Holland and Germany, we headed to our hotel. Bernd had kindly provided a web site for local accommodation. On it, was Centre Parcs Eifel just 7 miles down the road – ideal.
Having used Centre Parcs in the UK many times when the children were smaller, we knew roughly what to expect. The “comfort” accommodation can be booked by the night and is clean but basic i.e. room with TV and bed, and bathroom with shower. Although we didn’t realise that bed linen WASN’T included – the German website didn’t seem to mention it. Not to worry, Reception were glad to supply some for an additional fee.
The catering was similar to the accommodation – simple yet satisfying: steak, chips and ice cold German lager – what more do you need??